Run-away Princess, Kingdoms at a brink of an upcoming war, A Prince and An Assassin at her trail.

In short, the synopsis is slightly cliché with a hint of love-triangle. Not something I would read, however, I’m a sucker for Fantasy stories involving badass princess on the run.

While picking up the book, I thought that is resembled quite a bit with Carson’s The Girl of Fire and Thorns. (we all know how that went – my review for that can be read here). Fortunately, The Kiss of Deception has been everything I had hoped from the former book and I flew through its pages.

The book directly dives into POVs of our main three characters; The princess with a ‘gift’, The Prince, and The Assassin. Throughout the story, we get interludes of the Assassin’s and the Prince’s POV and their inner dilemma while the book continues on the development of the plot and the characters.

Kaden and Rafe, both, soon develop an interest in Princess Lia, however readers are kept in dark as to who is the assassin and who is the prince until past half of the book. The remaining half is where the story picks up and the bigger plot is revealed with an unraveling of a prophecy.

Mary Pearson excels at world building and still maintaining interest in the finer details of the differences in kingdoms, the languages spoken, and their cultures. The story was paced adequately, without being dragged and you start to care for all characters soon enough.

Overall I gave this a 3.5 out of 5 stars. Looking forward to reading the sequels.

What wonderful world building! The writing kinda fell short (Don’t get me wrong, the writing was great) but it wasn’t able to draw out the full potential of the world created.

To start with the setting and world building, (it’s been a week since I finished the book, and still haven’t been able to forget the feel of the Circus). It was -magical-, not Harry Potter Magical, but magical in its own right. I was simply drawn into it, and its atmosphere, the sounds, the feel, everything. I’ve been a sucker for circus and caravan adventures, since ‘The Famous Five’ was one of the very first books, and ‘The Name of the Wind’ is my all-time-fav, and I thank Erin for creating “Le Cirque des Rêves”.

For the Writing; the book is divided into 6 parts, and chapters are noted with a month/year beside their titles. I’m not particularly fond of journal-type writing, especially when it’s not in chronological order. I kept flipping pages going back to the previous chapters, just to mentally arrange the event of each chapter in chronological order. The lack of a table of contents was literally gutting me. After every few chapters, a page would describe the circus, the tone would change from third-person, to directly addressing the reader. I didn’t find the importance of those inserts, until the very last chapters, where everything fell into place.

The development of the characters is gradual (ahem, very-very gradual) even though a span of 30 years is squashed into the book, the book never felt rushed. I personally found the first half quite boring. The second half of the book gets into the actual premise (a.k.a the competition) when everything starts to make sense, and by now the I actually cared enough about the characters (including the side-characters) that I became emotionally attached to them. The last 50-100 pages were difficult to put-down, and convinced me why I might eventually re-read this.

However, one may argue over a couple of plot points not explained or even left out completely, but I would give it the benefit-of-doubt and leave it as description details, not necessary for plot progression. The ending is satisfying overall, leaving you scraping around for more of “Le Cirque des Rêves”, but instead you’d be afraid that a possible addition in the series is more likely to break-it than to make-it.

Overall I gave a three, but half extra point for the marvelous world building – 3.5 out of 5 stars! 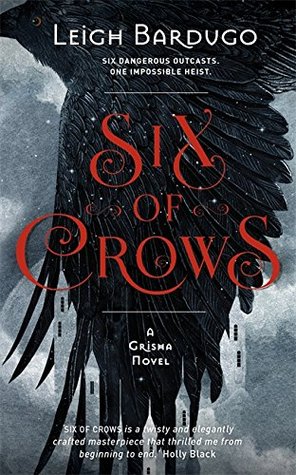 Outcasts? An impossible heist? …Say no more!
This book was pretty much an auto-buy for me. I’ve read the Grisha Trilogy, and having another book set in the same world was a delight.

[To answer a common question, No – you needn’t read the Grisha Trilogy first in order to read this, but some of the characters will be mentioned, and if you’ve read it, it’ll only make you smile, and also you’ve have a deeper understanding of the Grisha World]

Okay diving into the review..

I really enjoying the writing style and how Bardugo intertwined the past and the present in such a beautiful way. Usually, when a flashback is involved, authors tend to alternate the chapters of present and past. Six of Crows alternates the chapters from the POV of all six characters, Kaz, Inej, Nina, Matthias, Jesper, & Wylan; and are in third-person tone. Each chapter seamlessly joins their current circumstances with their past lives, giving more meaning to their thoughts and decisions.

Furthermore, the way the flashback was incorporated to the present storyline was the best part for me – it didn’t give away too much, but it made you gradually like the characters and actually worry about them towards the end. This character development was flawless and the story never felt like it dragged or slowed. The impossible heist truly felt impossible, and I found myself cheering the characters on and holding my breath when they would fall into mishap.

The ending caught me off guard, as I was too involved with the character to see the incoming plot twist. Nevertheless, I absolutely loved this book and I do recommend it!

Looking forward to the second book: The Crooked Kingdom!

I hadn’t particularly cared for the book when it had come out, however after reading the majority of the reviews, the book seemed like a must-read. Unfortunately, this book disappointed me.

The story is about a turmoil lurking around a kingdom’s corners, and Elise is secretly wed because it would benefit the two kingdoms, since she is the ‘chosen one’.

The plot is slightly cliche, and the story doesn’t explain a lot of the ‘power’ Elise possess. Elise is displayed to be beyond ordinary, to the point of self-loathing – just because she was overweight and has an older sister who is more dominant.

Elise develops into becoming the people’s hope of winning the war-to-come, and yet her King doesn’t notice or appreciate her, and Elise remains in self-doubt. The book is packed with Elise’s journey and her development to a stronger character that will be able to lead the people when the time comes.

The book solely focuses on character development and progression for Elise. The writing complements the story progression with a lot of descriptions, but I personally found it quite slow and boring, especially because I didn’t care about any of the characters, especially Elise.

Overall I gave this a 3 out of 5 stars. I probably won’t be reading the sequels.